It is strongly recommended to give the variables meaningful names. Otherwise, you will quickly begin to flounder in a more or less complex projects. In a few weeks you will not understand them. 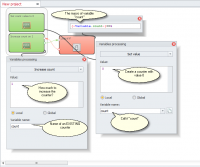